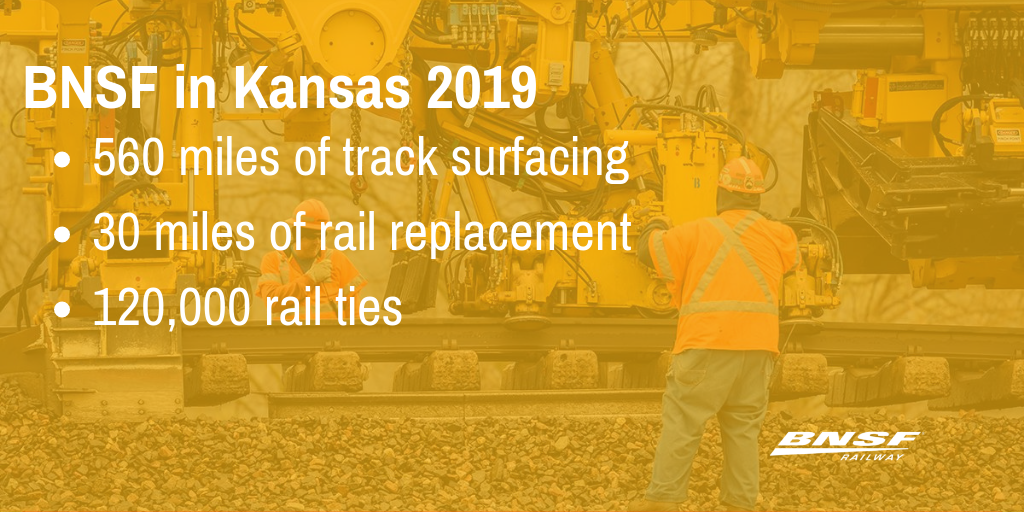 KANSAS CITY, Kansas, February 27, 2019 – BNSF Railway Company (BNSF) today announced that its 2019 capital expenditure program in Kansas will be approximately $165 million. The largest component of this year’s capital plan in the state will be for replacing and upgrading rail, rail ties and ballast, which are the main components for the tracks on which BNSF trains operate, ensuring BNSF continues to operate a safe and reliable rail network.

Since 2014, BNSF has invested approximately $830 million to expand and maintain its network in Kansas. This year, the maintenance program in Kansas includes about 560 miles of track surfacing and/or undercutting work as well as the replacement of nearly 30 miles of rail and about 120,000 ties. To support increased intermodal traffic, BNSF plans to begin a multi-year project to install double track on portions of the Emporia Subdivision, which runs between Wellington and Kansas City.

“Because of BNSF’s projects in the state, Kansans can find comfort in knowing that the 4 million carloads of freight we move each year in their state will arrive safely at their destination,” said Ben Sharpe, general manager of operations, Kansas Division.