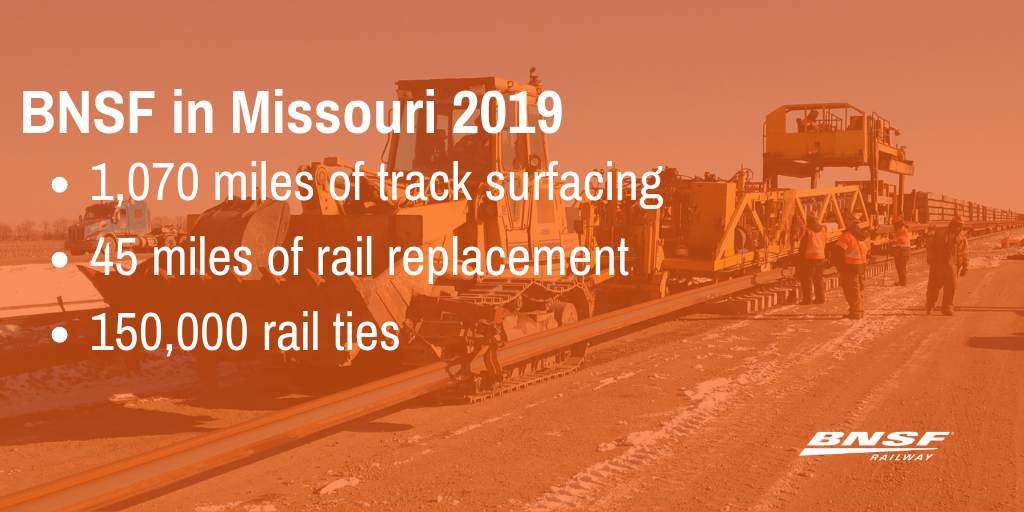 KANSAS CITY, Missouri, February 27, 2019 – BNSF Railway Company (BNSF) today announced that its 2019 capital expenditure program in Missouri will be approximately $140 million. The largest component of this year’s capital plan in the state will be for replacing and upgrading rail, rail ties and ballast, which are the main components for the tracks on which BNSF trains operate. These planned maintenance projects help enable BNSF to operate a safe and reliable rail network.

Over the past five years, BNSF has invested more than $935 million to expand and maintain its network in Missouri. This year, the maintenance program in Missouri includes more than 1,070 miles of track surfacing and/or undercutting work as well as the replacement of nearly 45 miles of rail and more than 150,000 ties.

“BNSF’s tracks reach all parts of the state of Missouri, helping consumers get the agricultural, consumer and industrial products they need in their everyday lives,” said Steve Thompson, general manager of operations, Heartland Division. “Each year, we move 5 million carloads on our tracks in Missouri, and our annual maintenance projects play a key role in moving that freight safely.”