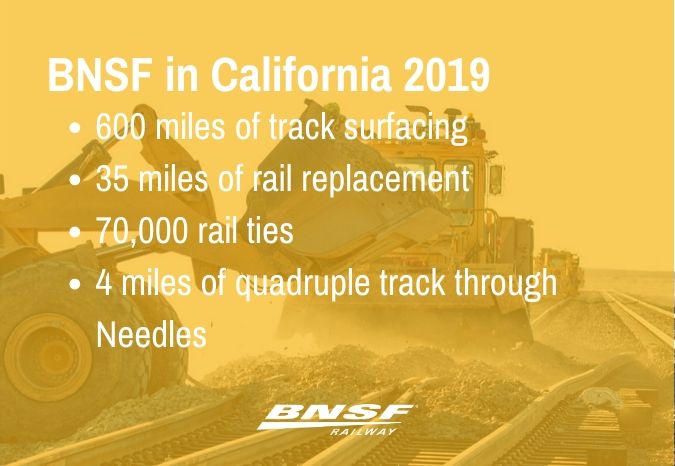 The 2019 maintenance program in California includes more than 600 miles of track surfacing and/or undercutting work as well as the replacement of approximately 35 miles of rail and close to 70,000 ties.

Since 2014, BNSF has invested more than $1 billion to expand and maintain its network in California. In 2019, BNSF will continue enhancing capacity through the city of Needles by adding approximately four miles of quadruple main track. In support of volume growth in Southern California, BNSF plans to develop incremental lift capacity at Barstow by constructing new production tracks and parking stalls, as well as acquiring lift equipment.

“With intermodal facilities in nine California cities that connect West Coast Ports to major U.S. markets, the state is crucial to the success of BNSF’s rail network,” said Donnie Stilwell, general manager of operations, California Division. “Committing to ongoing maintenance projects and enhancements in the state highlights our dedication to Californians to move the more than 4 million carloads of freight we move through the state each year safely and efficiently.”