Big Red Challenge: Helping veterans overcome obstacles in life and on the course 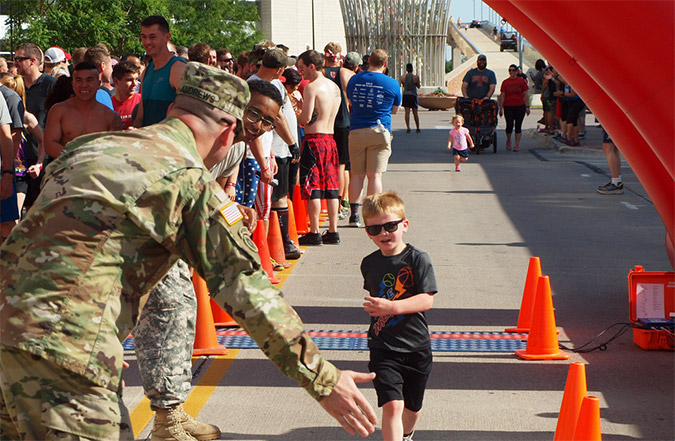 Everyone remembers where they were on Sept. 11, 2001. Nate Schimmel was 10 and living in Japan, where his parents were teachers on a military base. Being surrounded by members of the military during the attacks on the United States crystallized a sense of duty in him.

Fast forward a dozen years, when Schimmel was attending the University of Nebraska in Lincoln (UNL) as a member of the ROTC, preparing to become an officer in the Air Force. Wearing his cadet uniform made him feel different, like he didn’t quite fit in on campus.

“But then I looked around and saw older students who were veterans, and I couldn’t imagine what it would be like for them. It’s hard enough to go to college, which needs to be more inviting to our vets,” Schimmel recalled. And that’s when he decided to try to make a difference for those transitioning to civilian life.

For veterans, getting their lives back on track can be very stressful. Many suffer from Post-Traumatic Stress Disorder. “I want to give them the opportunity during this transition to find a new mission, purpose and passion, and to surround them with people who are doing the same thing,” said Schimmel. “They need a chance to just take a step back to define and figure out the next chapter of their life.” 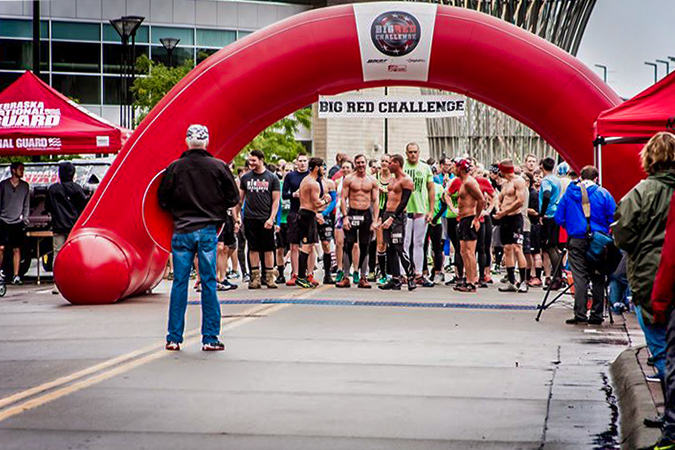 Underlying Schimmel’s dream are three key pillars: challenge, service and community. To achieve all three, he founded the Big Red Challenge (BRC), a not-for-profit annual obstacle course race held in Lincoln. BNSF has been a sponsor since BRC’s inception and is a longtime military-friendly employer.

“BNSF is a strong supporter of the military and causes that support veterans,” said Andy Williams, regional director, Public Affairs for BNSF. “Our railroad has a big presence in Lincoln, and we saw the Big Red Challenge as a natural fit for our company to support.”

The race brings together service members, veterans and civilians to challenge themselves with 20 obstacles designed to simulate an actual combat skill – “save your buddy” tire carry, belly-crawling “under fire” and “ammo carry” resupply among them. Over this 7K military-inspired route, participants’ limits are tested.

There are several race categories, from the competitive 7K Elite for serious athletes to a 7K non-competitive, to a Lil Red Challenge for kids. Veterans or active duty can participate at a reduced registration rate.

But BRC is more than just a race to challenge the physical condition. Proceeds fulfill the service aspect of the mission, helping to underwrite scholarships for veteran-students and assisting organizations that provide services to vets. The bonds that the race creates – between athletes, volunteers, spectators and sponsors – build community.

“I’m a big advocate for this program,” said Rod Shaw, a BNSF safety assistant at the railroad’s Havelock Car Shop in Lincoln and winner of the 2016 BRC Elite men’s division. “Because of BRC, I’ve met veterans from all walks of life, and it’s opened my eyes to how they’ve paved the way for our country.”

Shaw has since recused himself from competing because he now helps design the urban obstacle course, making slight changes each year to enhance the challenge. He also is a “race Sherpa,” helping others achieve success in the sport. “It’s so cool to see people overcome their doubts and fears as they overcome one obstacle at a time,” Shaw said.

Nearly seven years after its first race, BRC continues to evolve with the addition of a Memorial Walk, starting in 2020. This 1-mile walk for all ages is to remember the fallen and to keep their stories alive.

One who will be participating is Barb Yllescas. In 2008, her son Robert, an Army Ranger captain, was on his third tour, when a bridge he was crossing in Afghanistan was detonated. He died from his injuries weeks later.

Barb was contacted by BRC in 2019 because Robert, who went to school at UNL, was going to be among the state’s fallen honored with a story board about his service and dog tag medal in his name. (The dog tags are given as medals to BRC finishers.) She came to Lincoln to watch the race and when it was over, thanked Schimmel.

“For all the blood, sweat and tears that go into this, having someone deeply and genuinely thank me was an emotional and affirming,” said Schimmel.

Yllescas also had an idea for him: find a way to involve the Gold Star families that have lost a loved one in military service. “As I watched the kids run [in the Lil Red Challenge], I thought, ‘We Gold Star moms could do this,’ so I suggested a memorial-type walk to Nate,” she recalled. “Any way that anyone can honor our fallen heroes, we moms and dads are happy that people want to remember our children. It helps us heal.”

The next BRC is June 13, 2020, with registration now open. While most of the nearly 1,000 participants are from Nebraska, with about a quarter of those veterans, the race is open to anyone.

Long term, Schimmel has a vision for BRC to grow nationwide. “We don’t have a famous person or a big foundation to underwrite us, but I believe in this and one person, one sponsor at a time, we are getting support. Others, like BNSF, see the potential and have helped make BRC possible,” he said.

Today, Schimmel continues in active duty for the military, while he continues to develop the non-profit. “I am leading and growing an all-volunteer team based on a vision. It has taught me that our greatest fear isn’t the fall -- but taking flight with the new and unfamiliar.”

Service: Life has purpose when we give back.