At BNSF, we operate 24/7/365. During the winter, this means that our trains are traveling (or dashing, some might say) through the snow, providing railfans and photographers alike with a unique opportunity to photograph our bright orange locomotives against a pristine white background.

Here are some of our top choices from the #bnsfsnowphoto social media contest we ran in January. Our winners were determined by their creativity, composition and the photographer’s ability to capture their photo from a safe distance.

As “cool” as these photos may be, remember to always photograph trains from a safe distance. Our tracks are private property and photographing subjects on them or crossing them to get “the shot” is trespassing, not to mention very dangerous. 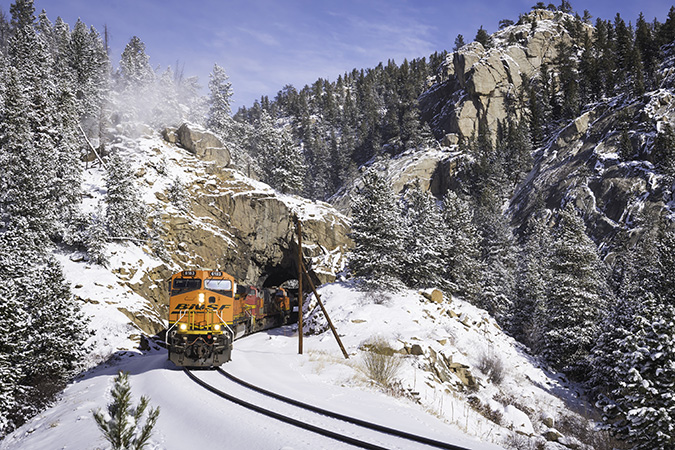 Nicholas D’Amato submitted this photo on Twitter under the username @DiamondDPhotography.

Photo description: The photograph is from 2017 and shows an eastbound BNSF train on a picture-perfect February morning near Pinecliffe, Colorado. 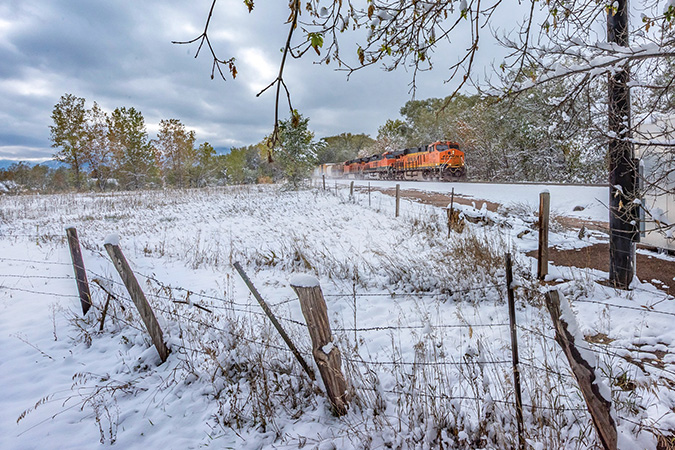 Erik Lindgren submitted this image on Instagram under the name @coloradorailroadphotographer. He snapped the shot during a snowstorm in Colorado last October.

Photo Description: A quick snowstorm fell on October 14, 2018, flocking many of the vibrant fall colors of rural Boulder County. The Front Range Subdivision has been a lifeline to the area for over a century, first operated by the Colorado & Southern Railroad and then under the control of the mighty Chicago, Burlington & Quincy starting in 1900. Today, BNSF operates a vibrant array of spectacular trains every day along the route, including this northbound manifest on its way to Cheyenne and markets north and west. Photo taken at 55th Street and the Diagonal Highway near Niwot, Colorado. 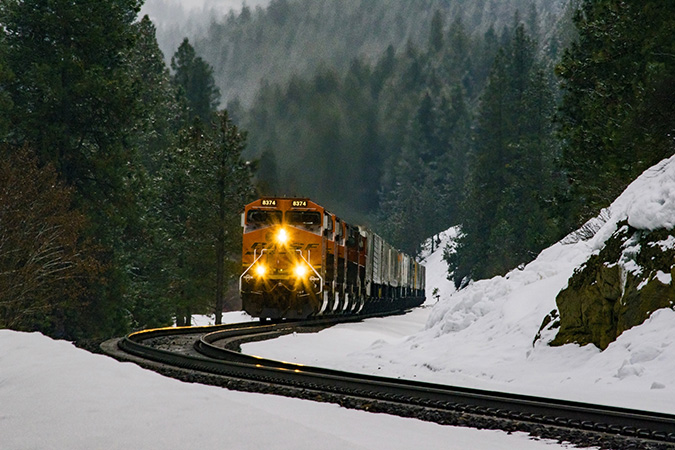 Andrea Capiola submitted this photo to our Friends of BNSF Facebook group, an online community for railfans and BNSF supporters to discuss and share their favorite photos.

Photo Description: On a snowy winter day in the Cascade Mountains, I caught this westbound Z-train beginning its climb over Stevens Pass in Leavenworth, Wash., on February 26, 2017. 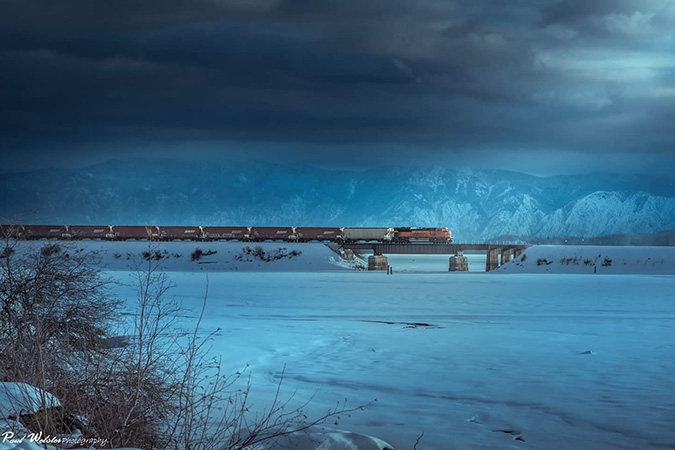 Paul Webster submitted this photo, which he calls Midnight Train, in our Friends of BNSF Facebook group.

Photo description: I tried seven times to take this photo and the first time was complete failure even though I had the perfect train show up. I got all my gear set up and looked through my camera’s view finder. I noticed when I took some practice shots that there was a little bright red box blinking in the corner with a line running through it. The bright red box blinking was my camera telling me I had no memory card. Then conditions didn't pan out after that, because either the mountain was hidden in the background by clouds or fog or no train at all. Meanwhile, the drive to this spot is one hour from my home. So, I drove up for the seventh time and I took this shot and was very pleased with it. I thought I was going to just edit a normal shot that looked high definition. While editing, I came across something similar to the photo I am sharing with you now. It made me feel like I was there at midnight so I went with it and finally got the photo to look the way it does now. 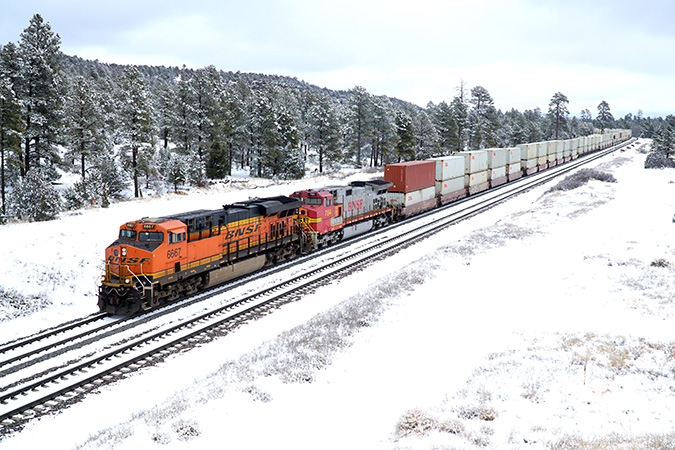 Barry Sprofera also submitted this photo to the Friends of BNSF group. The shot was taken from the Seligman Subdivision in Arizona this past January.

Photo description: There is a Route 66 overpass at this location called the Walnut Canyon overpass that I shoot from frequently. As described in the photo submission, ‘Pulling hard up the grade east of Flagstaff, the S LPKSCO1 11 with BNSF 6667 and BNSF 724 provide the horsepower and some colorful contrast to the white scenery from an overnight snow.’ 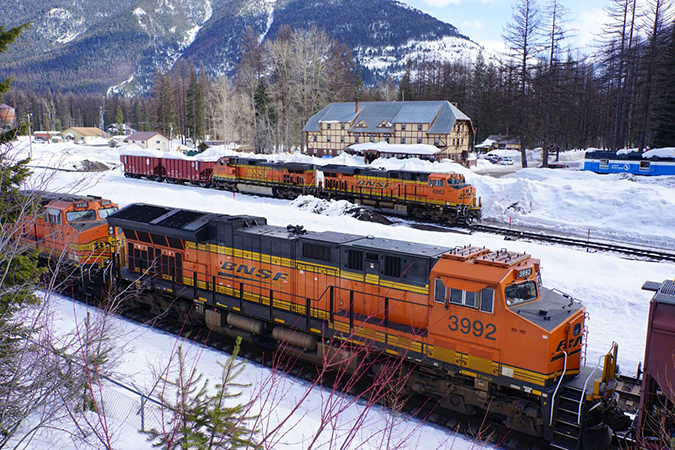 Photo description: I took this photo on March 21, 2018, a little before noon. I was staying for a couple of days at my favorite spot to watch and photograph trains, the historic Izaak Walton Inn, located in Essex, Mont. I went out after a late breakfast to watch train activity from the inn and waited and watched from the pedestrian bridge over the tracks. I was watching what I believe was a local maintenance train with caboose being put together in the Essex Yard. Then a few minutes later, an eastbound oil train passed under the bridge. I got some good photos of the lead locomotive, but I wanted to get a picture of the train in the yard and the train on the main line with the inn in the background. So, I quickly ran across the bridge and down the ski trail a couple of yards to get the good view I wanted, hoping for a pusher on the back of the oil train. I got there just in time to see two locomotives helping in the middle of the train, so I quickly took the shot with everything perfectly lined up.

Photo description: During my second-ever trip to Montana, a snowstorm hit the Laurel/Billings area. I ventured out due to my limited time in the area and captured this train on the Montanan Rail Link, heading west through West Rapids, while an eastbound coal train waited in the hole. 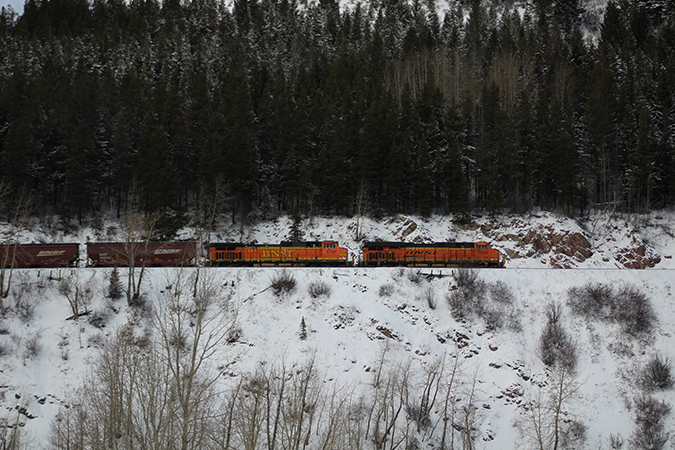 Zane Amick submitted this under the Instagram username @Railroads_Are_Life. 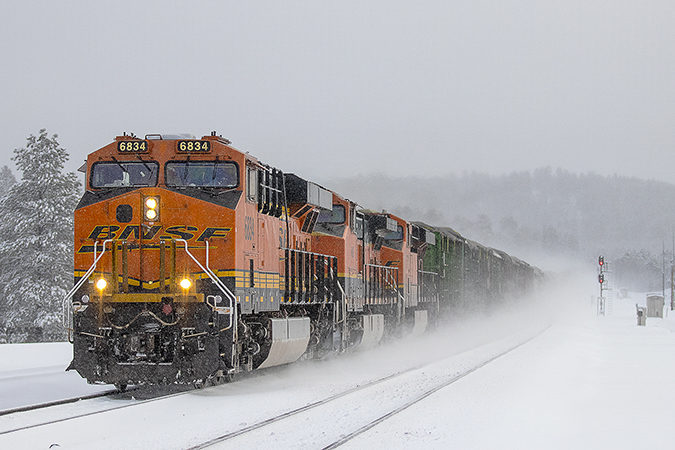 Ryan Adams submitted this under the Instagram username @Vermonter_Railfan and shows us a different version of Arizona than one might expect.

Photo description: As late night storms continue to bring fresh powder to the northern reaches of Arizona, BNSF 6834 West begins its long journey, dropping downgrade on the Seligman Subdivision after passing the Arizona Divide a few miles east of its location.

We'd like to thank everyone who submitted a photo to our winter photo contest. There were a record number of submissions and while they may not have been chosen, we still appreciate every supporter who continues to recognize BNSF as a part of their community.

Each year, BNSF reviews and updates our winter preparedness action plan so that employees can be fully prepared for inclement weather. Still, sometimes winter storms can take us by surprise, like winter storm Jaden, which visited Chicago in late January and brought record-breaking wind-chill temperatures.

Below are some ways that we are prepared for winter weather: