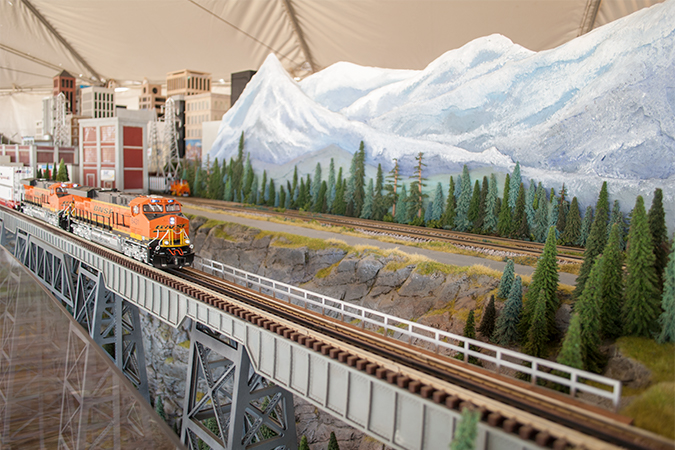 We know that trains are super cool but how to tell the rest of the world? Simple, we shrink a slice of modern freight railroading down to Lilliputian scale – called O gauge in train modeler terminology or toy trains to the novice – then wait for the “oohs” and “ahhs.” (Actually, miniaturizing a freight railroad is not so simple, but more about that later.)

Every year since 2012, BNSF has proudly displayed a detailed 8- by 32-foot traveling model train layout at the annual Berkshire Hathaway Inc. (BRK) meeting in Omaha, Nebraska. About 40,000 people from all over the globe attend this lollapalooza of shareholder meetings.

The three-day event, which was held May 3-5 this year, is no ordinary meeting and is widely covered by the media. In addition to getting an opportunity to learn from legendary investors Warren Buffett and Charlie Munger, visitors also get a chance to hit the exhibition floor, where they can check out and shop the booths and displays of all the BRK brands.

When BNSF officially joined the BRK family in 2010, we borrowed and rebranded a train layout for the annual meeting the following year. But come 2012, we wanted to make a big statement of our own, one that would celebrate both our heritage and our future.

The layout was conceived, using the bright corporate BNSF orange and logos, and incorporating two of BNSF’s iconic sections of railroad – Two Medicine Bridge in Montana’s Glacier National Park and Sullivan Curve over California’s Cajon Pass. With the addition of more than 50 BRK sister companies as “storefronts” (with a NetJets executive jet endlessly circling on one end), the town of “Berkyville” was born.

In addition to a downtown, plans called for mining operations, a coal-fired power plant, grain elevators and an intermodal yard. Three loop tracks would run over mountains and through the cityscape, tunnels and rural areas, connecting the railroad to customers – just like in real life. It would also showcase the diverse commodities BNSF handles (intermodal, merchandise, grain and coal) and run multiple trains at the same time. And with a nod to passenger operations, a union station and a streetcar were incorporated.

The three-dimensional display would need to give observers the full experience: the clickity-clack of trains moving over track, locomotive horns, illuminated buildings and street lamps, animations and video billboards. And, importantly, the layout would also need to be transportable.

Enter Roger Farkash to take on this not-so-simple project. He and wife Dorcie are owners and creative team behind TW Design, which builds theatrical sets and trade show displays. Roger also runs TW TrainWorx, specializing in building model railroads. BNSF called him in January 2012 with the concept and specifications. Two months later, the design and track plan approved, Roger got the green light, with a construction deadline of about eight weeks. 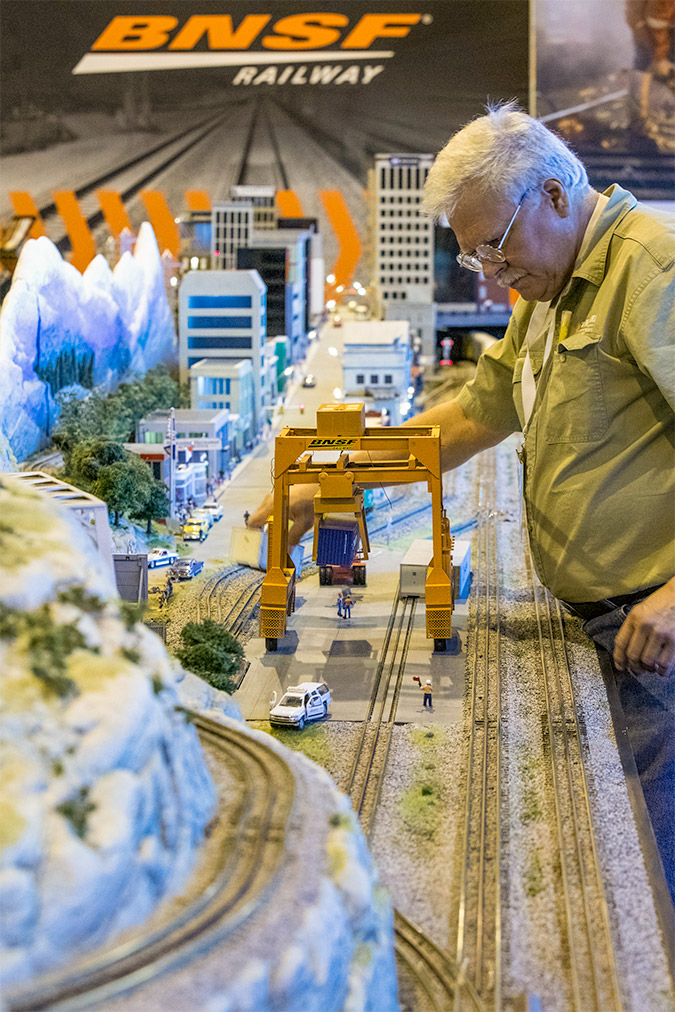 “Building Berkyville was quite a feat, but it was a lot of fun. It combined our passion for trains with our theatrical and trade show experience, as we applied carving, welding, model-making and painting into the super structure,” he said. To conceal the electrical control components that operate the Lionel trains, a drawer was built into the side allowing easy access. The project took about 2,200 man-hours.

“In just 8 by 32 feet, Berkyville captures the sweep and drama of modern railroading,” said Carl Swanson, editor of Classic Toy Trains magazine. “The creation of a city scene on one side and rural scenery on the other conveys the varied geography and vast scope of BNSF. As a public display, the layout works especially well because it tells the BNSF story in miniature – and in motion!”

To make the layout transportable, the TW TrainWorx team employed modular construction using eight 4- by 8-foot sections that allow the display to be broken down, moved on casters then hauled in a 53-foot trailer.

A large graphic wall displaying BNSF corporate messages is installed behind the layout. The layout typically takes about four hours to set up and another two to get trains running. Since that first year, the team has added more vignettes of people doing everyday tasks. The railcars are updated occasionally to coincide with new BNSF equipment.

In addition to the BRK meeting, the layout is also used for annual employee events. But the BRK meeting is one of the highlights of TW Design’s year.

“We get real joy watching people’s faces as they experience the art of the train,” added Farkash. “It’s a real connection for the shareholders and employees, and you can tell it makes everyone feel like they’re part of the family.”