Rocky is our goat – and among the greatest of all time! | BNSF | Rail Talk

Rocky is our goat – and among the greatest of all time! 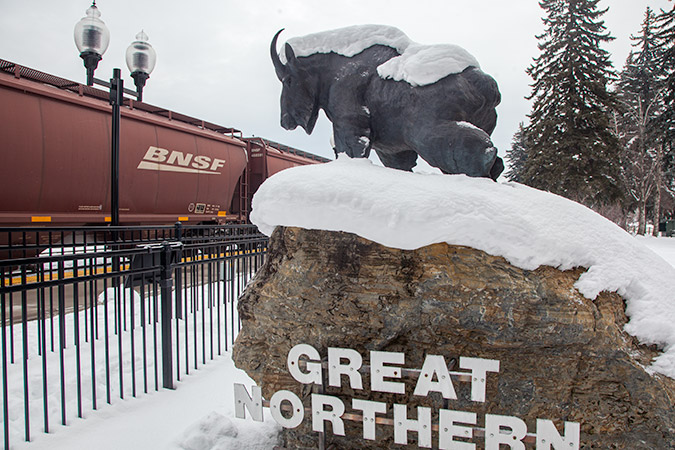 Sylvester Stallone has nothing on our Rocky, who preceded the actor’s breakthrough role by several decades. Our Rocky is even trademarked.

Rocky the Goat was the star of the logo for one of BNSF’s predecessors, the Great Northern Railway (GN).

For nearly a century, Rocky has been identified with the GN, which popularized the area in Montana’s Rocky Mountain region known as Glacier National Park. From the GN’s Empire Builder passenger trains, tourists could view the picturesque valleys and snow-capped peaks and on occasion watch Rocky Mountain goats leap among the park’s bluffs and ridges.

Always looking for new ways to promote the railroad, the goats in the park piqued the interest of GN Vice President William Kenney, who in 1921 had the inspiration to make the bewhiskered animal a railroad emblem. “Rocky” the goat was born, though only in image; his name would come later. (He’s actually not a goat, but a member of the antelope family.)

From 1921 to 1936, the appearance of the GN trademark goat was altered only slightly while there were many variations of the wording around the edge of the circle. The colors used were predominantly red, white and black. Earlier versions had the goat facing forward, while later iterations had him in profile. In 1967, a few years prior to GN becoming part of the Burlington Northern Railroad (BN), the logo would show Rocky in blue on a white background or white on blue.

Rocky’s image would delight children, rail fans and even those who knew very little about railroads but could easily recognize the emblematic goat. In 1955, the unnamed goat insigne got his name when GN’s Public Relations Department came up with the name Rocky for the animated goat in the railroad’s TV ads.

“Rocky was the Nike ‘swoosh’ of his time,” said Gus Melonas, director, BNSF Public Affairs. “The Great Northern was known for the goat. They really didn’t even have to advertise because Rocky did it for them.” Children and adults alike sported Rocky paraphernalia. “I remember having a lunchbox with Rocky on it,” Melonas recalled.

And even today, Rocky the Goat lives on in public memory. “People remember Rocky because it was new, it was fresh,” Melonas said. “Railroads in general were popular at the time, but Rocky added a personality to the Great Northern that made it stand out. When the merger happened [in 1970] and BN was formed, people really missed the goat.”

Today, the Great Northern Railway Historical Society (GNRHS) helps to preserve the Rocky legend. The society’s magazine is called The Great Northern Goat and many of its members are proud to call themselves “goats.”

The society has been functioning for nearly 50 years, maintaining and preserving the predecessor’s history. “It’s important that people of all ages know where the railroad began and how we got where we are,” said Gary Nelson, a GN/BN/BNSF retiree in Andover, Minn., and former GNRHS board member. “Ours is a true success story."

Having brands like Rocky is also important for a company that is nearly 170 years old.

“Each symbol – like GN’s Rocky, or the Santa Fe’s Super Chief trains or the Northern Pacific’s Main Street of the Northwest, among others – help connect people to the railroad and our history,” said Nelson. “They keep the memory of the brand.”