Operational Performance
The operation continues to address service challenges from extremely cold weather that has impacted much of our Northern Corridor, including the Chicago area, during the past two weeks. Frigid temperatures, which dropped to more than 30 degrees below zero in some locations, have caused train delays and several service interruptions. Overall velocity for both cars and trains is down from the average levels reported in December, however, each has steadily increased following the New Year's holiday as operating conditions have improved across the BNSF network. Terminal dwell and the number of trains holding were elevated during the Christmas and New Year's holiday period but have been significantly reduced in the past few days.

Each BNSF operating division has a winter action plan to ensure that resources and procedures are in place to address severe weather conditions. In this short video, we highlight the impact that extremely cold temperatures can have on equipment and network infrastructure, and we discuss the actions that BNSF must take to ensure that we continue to operate safely: 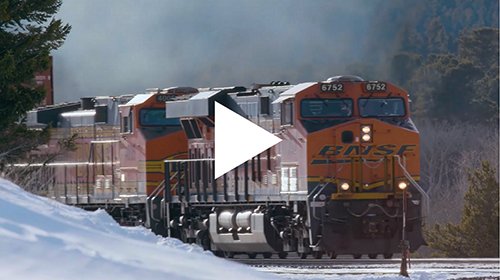 Service Expectations for the Week Ahead
No additional Arctic cold outbreaks are expected during the next several days as temperatures return to near normal levels across the North. While an active weather pattern returns in the Pacific Northwest, operating conditions for this time of year should remain favorable across much of the network.

Below is a look at the key operational performance categories for the week ending January 4:

Total trains held for the week decreased by more than 37 percent with an average of 118.1 trains held versus 186.7 trains held during the prior week.

Car velocity was up by nearly three percent at 197.0 MPD versus 192.2 MPD recorded the prior week.

Train velocity, measured in miles per hour (MPH), was up by nearly five percent versus the prior week at 17.9 MPH.

Terminal dwell decreased by nearly three percent versus the prior week at 26.9 hours.