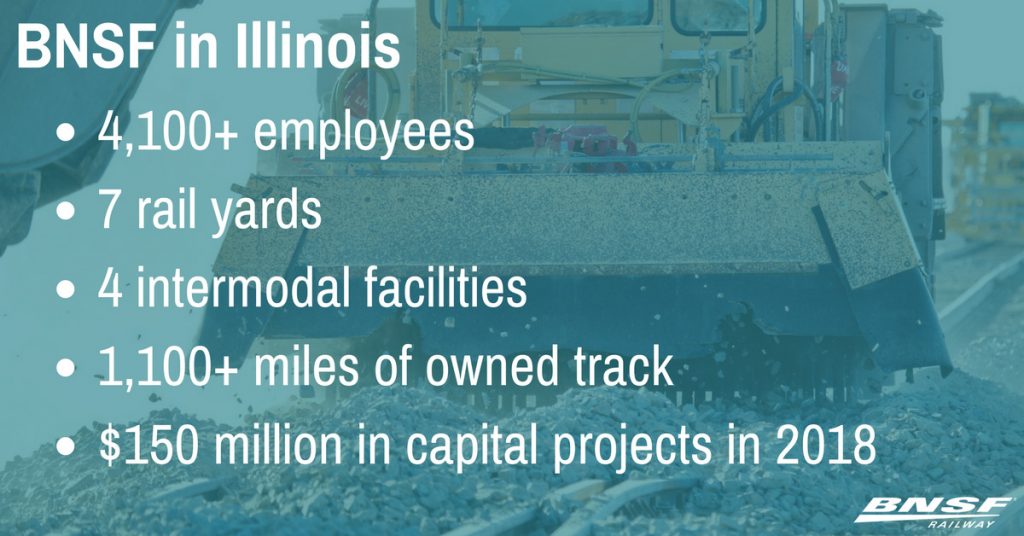 CHICAGO, February 21, 2018 – BNSF Railway Company (BNSF) today announced that its 2018 capital expenditure program in Illinois will be approximately $150 million. To ensure BNSF continues to operate a safe and reliable rail network, this year’s plan in Illinois remains focused on maintenance projects. The largest component of this year’s capital plan in the state will be for replacing and upgrading rail, rail ties and ballast, which are the main components for the tracks on which BNSF trains operate.

Over the past five years, BNSF has invested nearly $1.2 billion to expand and maintain its network in Illinois. This year, the maintenance program in Illinois includes more than 650 miles of track surfacing and/or undercutting work as well as the replacement of nearly 30 miles of rail and about 250,000 ties.

“Illinois is a vital link in BNSF’s 32,500 route-mile network and a key interchange point with other railroads enabling us to serve customers in Canadian and eastern U.S. markets. In total, nearly 2.9 million carloads and intermodal units are shipped to or from Illinois every year, making operating a safe and efficient rail network a priority in the state,” said Jason Jenkins, general manager of operations, Chicago Division.