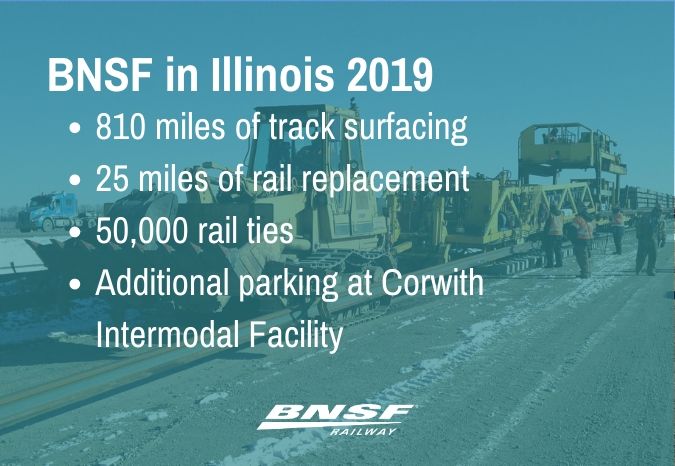 CHICAGO, March 4, 2019 – BNSF Railway Company (BNSF) today announced that its 2019 capital expenditure program in Illinois will be approximately $135 million. Most of this year’s plan in Illinois remains focused on maintenance projects to ensure BNSF continues to operate a safe and reliable rail network. The largest component of this year’s capital plan in the state will be for replacing and upgrading rail, rail ties and ballast, which are the main components for the tracks on which BNSF trains operate.

“As a national rail hub, Illinois plays an important role in our country’s transportation network,” said, Jason Jenkins, general manager of operations, Chicago Division. “This capital investment helps maintain a world class rail system that drives the state’s economy by linking it to markets around the world.”

This year, the maintenance program in Illinois includes approximately 810 miles of track surfacing and/or undercutting work as well as the replacement of nearly 25 miles of rail and close to 50,000 ties. BNSF has invested more than $1.2 billion to expand and maintain its network in Illinois over the past five years.

In Chicago, the company plans to add additional parking capacity at its Corwith Intermodal Facility.