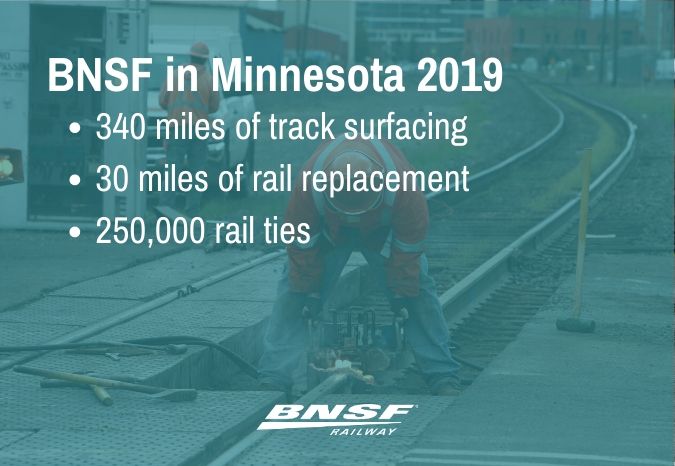 MINNEAPOLIS, February 26, 2019 – BNSF Railway Company (BNSF) today announced plans to spend about $95 million on its capital expenditure program in Minnesota in 2019. Most of this year’s capital plan in the state will be dedicated to replacing and upgrading rail, rail ties and ballast, which are the main components for the tracks on which BNSF trains operate. Planned maintenance activities help ensure BNSF can continue to operate a safe and reliable rail network, which is why BNSF has invested approximately $840 million to expand and maintain its network in Minnesota since 2014. This year, the maintenance program in Minnesota includes about 340 miles of track surfacing and/or undercutting work as well as the replacement of about 30 miles of rail and more than 250,000 ties.

“By planning regular maintenance activities we can continue to operate trains in Minnesota safely and efficiently, giving our customers the service they expect,” said Chad Sundem, general manager of operations, Twin Cities Division. “In addition to the agricultural products we move in the state – including corn, wheat and soybeans – we also move large quantities of timber, paper products and taconite from Minnesota to other markets.”