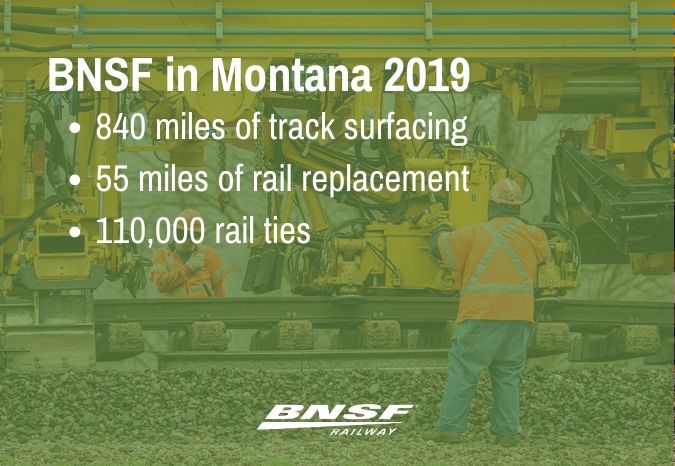 WHITEFISH, Montana, February 26, 2019 – BNSF Railway Company (BNSF) today announced that its 2019 capital expenditure program in Montana will be approximately $105 million, with a majority of the projects consisting of planned maintenance. This year’s capital plan in the state will include replacing and upgrading rail, rail ties and ballast, which are the main components for the tracks on which BNSF trains operate.

“The maintenance projects planned for this year in Montana will help BNSF continue to operate safely and efficiently in the state,” said Brandon Archambeau, general manager of operations, Montana Division. “Safely transporting agricultural products, consumer goods and other freight commodities remains our top priority at BNSF.”

Over the past five years, BNSF has invested approximately $880 million to expand and maintain its network in Montana. This year, the maintenance program in Montana includes more than 840 miles of track surfacing and/or undercutting work as well as the replacement of about 55 miles of rail and close to 110,000 ties.