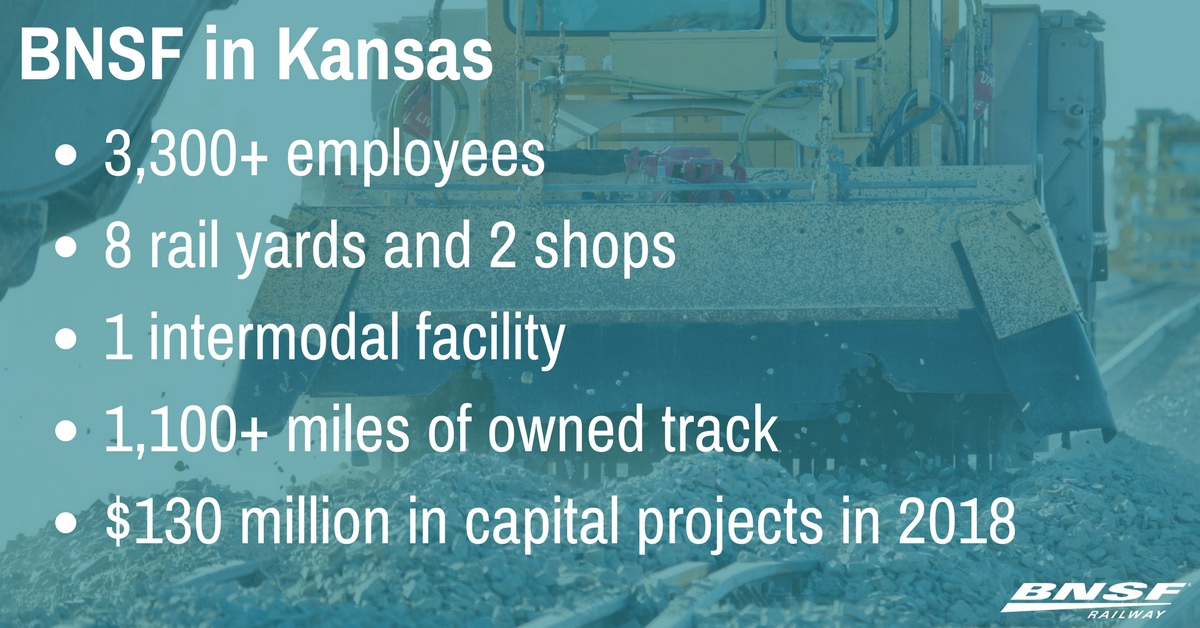 KANSAS CITY, Kansas, February 14, 2018 – BNSF Railway Company (BNSF) today announced that its 2018 capital expenditure program in Kansas will be approximately $130 million. To ensure BNSF continues to operate a safe and reliable rail network, this year’s plan in Kansas remains focused on maintenance projects. The largest component of this year’s capital plan in the state will be for replacing and upgrading rail, rail ties and ballast, which are the main components for the tracks on which BNSF trains operate.

Over the past five years, BNSF has invested about $875 million to expand and maintain its network in Kansas. This year, the maintenance program in Kansas includes approximately 900 miles of track surfacing and/or undercutting work as well as the replacement of nearly 20 miles of rail and close to 140,000 ties. BNSF will also construct two bridges in Quenemo, and add parking bays at the Kansas City Automotive Facility.

“BNSF moves more than 3.8 million carloads of freight in Kansas each year. With access to all major U.S. markets, as well as several Mexican and Canadian markets and west coast and gulf coast ports, Kansas’ importance to the overall U.S. economy only continues to increase. As a result of BNSF’s projects in the state, Kansans can continue to rely on the dependability of a well-maintained rail network positioned for growth,” said Matt Garland, general manager of operations, Kansas Division.

The 2018 planned capital investments in the state are part of BNSF’s $3.3 billion network-wide capital expenditure program announced last month. These investments include $2.4 billion to replace and maintain core network and related assets, approximately $500 million for expansion and efficiency projects and $100 million for continued implementation of Positive Train Control (PTC). BNSF has completed the installation of PTC on all its federally mandated subdivisions and is currently running hundreds of trains daily with PTC as it tests revenue service across its mandated territory. Another element of its capital plan will be $300 million for freight cars and other equipment acquisitions.