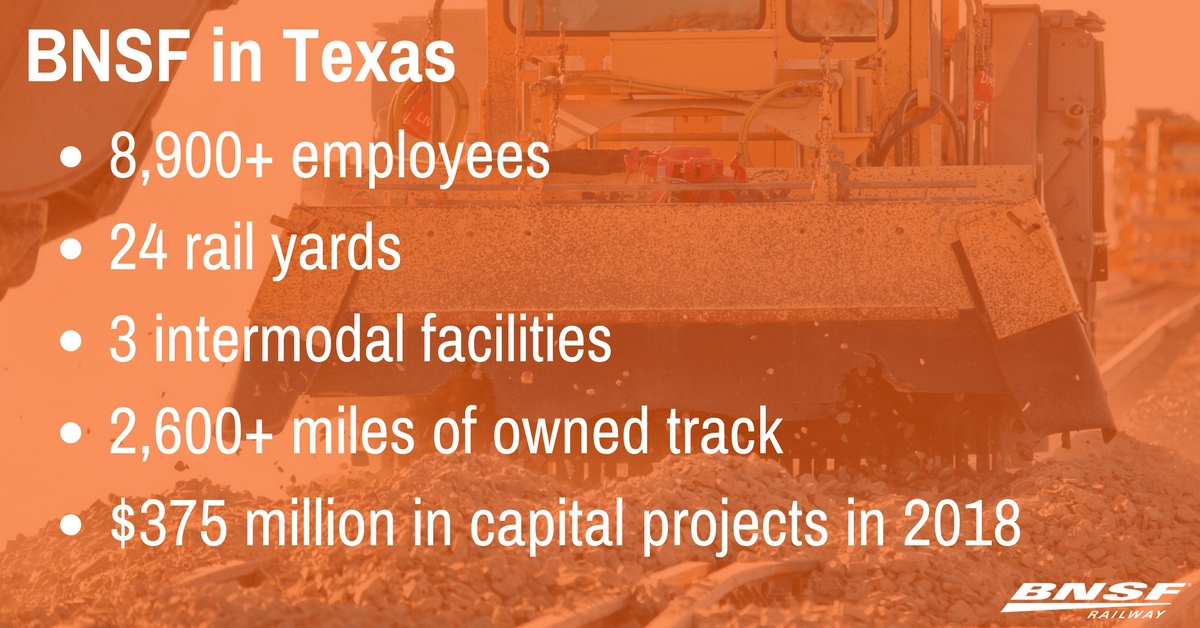 FORT WORTH, Texas, February 15, 2018 – BNSF Railway Company (BNSF) today announced that its 2018 capital expenditure program in Texas will be approximately $375 million. To ensure BNSF continues to operate a safe and reliable rail network, nearly half of this year’s spend in Texas will be for the maintenance of its rail, ties and ballast – the main components of the track on which trains operate. The remainder will go toward expansion projects designed to enhance capacity and fluidity along the network.

“Texas has more miles of rail than any other state, with roughly 440 million tons of agricultural, energy, industrial and consumer products moving via the state’s rail lines each year. By performing regular maintenance and capacity projects in the state, BNSF is fulfilling its commitment to operate as safely, reliably and efficiently as possible,” said Janssen Thompson, general manager of operations, Red River Division.

Over the past five years, BNSF has invested nearly $1.8 billion to expand and maintain its network in Texas. This year, the maintenance program in Texas includes approximately 1,400 miles of track surfacing and/or undercutting work as well as the replacement of nearly 40 miles of rail and more than 450,000 ties. BNSF is also investing in several capacity expansion projects in Texas. On the Hereford Subdivision, crews will complete work this year on expansion to quadruple main line track of more than four miles through Amarillo. On the Wichita Falls Subdivision, which runs between Wichita Falls and Fort Worth, crews will complete installation of Centralized Traffic Control on the entire subdivision, install one new siding and extend another to increase capacity as well as address increased train flows. In the Houston area on the Conroe Subdivision, construction is scheduled to begin on a new connection and siding in Dobbin to help facilitate train flows between Dallas/Fort Worth and Houston.

BNSF also anticipates the completion of expansion projects started in 2016 at our Alliance Intermodal Facility. Those projects include adding parking capacity as well as acquiring lift equipment. Additionally, BNSF will begin construction to replace its existing bridge over the Trinity River near downtown Fort Worth.

The 2018 planned capital investments in the state are part of BNSF’s $3.3 billion network-wide capital expenditure program announced last month. These investments include $2.4 billion to replace and maintain core network and related assets, approximately $500 million on expansion and efficiency projects and $100 million for continued implementation of Positive Train Control (PTC). Another element of its capital plan will be $300 million for freight cars and other equipment acquisitions.